During Fashion Weeks across the globe, Respect for Animals and the Fur Free Alliance asks Prada to drop fur

Yesterday Burberry announced it is dropping the use of real fur and today the organisers of London Fashion Week has also said that fur will be banned from all its shows next week. The international Fur Free Alliance  and FFA member Respect for Animalsare launching a global campaign urging fashion brand Prada to join other fashion houses—including Gucci, Versace, Armani, Michael Kors, Donna Karan, Hugo Boss and many others—in adopting a fur-free policy. The campaign will take place during fashion weeks in New York City, London, Milan and Paris. 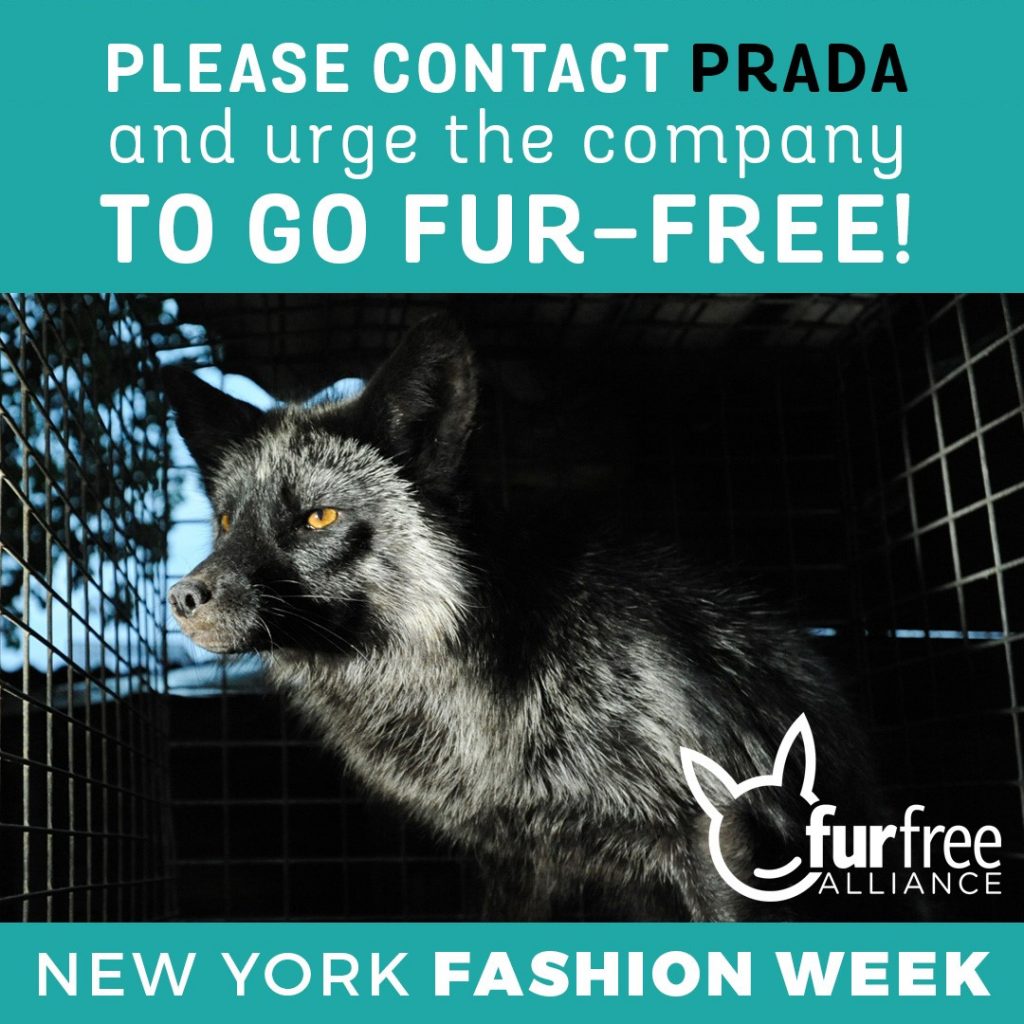 Respect for Animals’ Campaigns Director, Mark Glover, says: “This month’s London Fashion Week will be fur free, which is fantastic news. Following the recent fur-free commitments of Gucci, Versace, Michael Kors, as well as the landmark decision by Burberry yesterday, it is clear that fashion is turning its back on the cruel and unnecessary fur trade. Prada is becoming isolated and the sooner it commits to a fur-free policy the better: for themselves, for consumers and for the animals.”

Fur Free Alliance Chairman Joh Vinding says: “Consumers are supporting companies that care about animal protection, which is why so many of Prada’s competitors have gone fur-free. Prada should join other fashion leaders and go fur-free instead of supporting the extreme animal suffering that is all too common in the fur trade.”

On fur factory farms, wild animals spend their entire lives in wire-bottom cages, deprived of the ability to engage in natural behaviors—only to be killed by gassing or anal-electrocution. In the wild, animals are held in traps for days without food or water until trappers come to retrieve them, often gnawing off their own limb first in a desperate attempt to escape.

Fur production is also environmentally devastating. Fur factory farms and tanneries are extremely harmful to our soil and waterways—pumping waste and the toxic chemicals into the surrounding environment. And the traps responsible for killing wild animals are indiscriminate, often maiming and killing non-target animals, like endangered species and people’s pets. All told, the fur industry is an environmental nightmare.

Now that the majority of consumers want nothing to do with the fur trade, other major fashion brands have announced policies prohibiting the use of fur. And countries, like Norway, the Netherlands and Belgium are distancing themselves from animal cruelty by banning fur farming. As well, major cities from San Francisco to São Paulo have banned the sale of fur and Los Angeles.